Having Visited Park City and Utah Ski areas on many occasions now – I can honestly say it is one of my favourite ski resorts in North America. With the added advantage of one of the shortest ski transfers in North America — 45 Minutes from Salt Lake City international airport.

It has everything you would require and the one main Ingredient for a great North America Ski Holiday — Great SNOW.

Park City is a fantastic base from which to discover this fantastic Utah Ski Region. It has something for everyone, with plenty of groomed runs as well as moguls, four open bowls, terrain parks and night skiing on the longest lighted run in the area.

PLUS the Legendary Powder Conditions that often hit the area. As I say to most of my clients — JUST GO — try it and Love It. 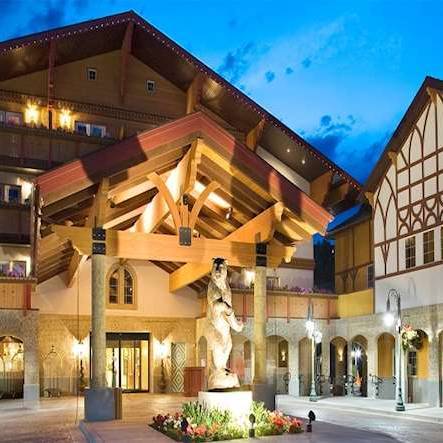 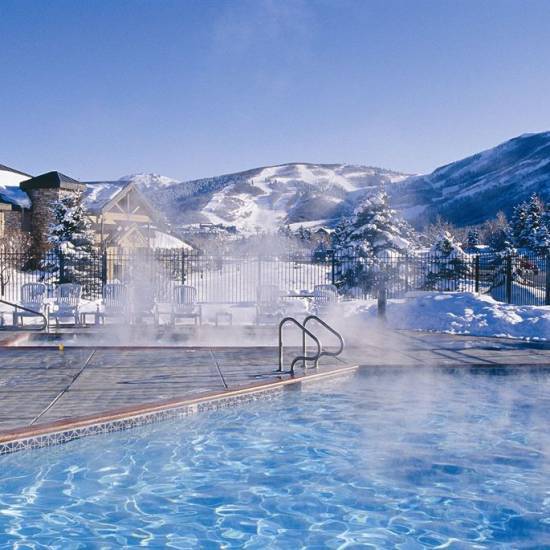 The Park City Peaks is a full service hotel, located about 1 mile from Main Street and the Park City ...
Details

The Skiing and Boarding is split into 3 Areas within the Close proximity of Park City:

With 9,326 acres of The Greatest Snow On Earth, 426 runs, bowls, terrain parks and 58 lifts, skiing and snowboarding in Park City has never been better. Home to three world-class resorts (Park City Mountain Resort, Deer Valley Resort, and Canyons Resort), Park City has something for everyone, ranging from lessons for beginners, to moguls and chutes for expert skiers, and everything in between. Deer Valley Resort is a skiers-only resort; Park City Mountain Resort and Canyons Resort host both skiers and snowboarders.

Park City Mountain Resort itself & which hosted the snowboard events and the men's and women's giant alpine slalom events in the 2002 Olympic Winter Games. Many improvements have been made, making the resort what it is today.

Skiing in Park City is at an altitude of 6900 feet with the stunningly beautiful Wasatch Mountains as a backdrop, just 37 miles east of the Salt Lake International Airport.

Park City and the Ski Areas also have an air temperature warmer than the North American norm. According to locals their snow is 'fluffed and dried' in the clouds as they come over the desert, before being dumped on the resort.

All three of the Park City Ski areas are in close proximity to each other. Easily accessible with the fantastic Free Ski Bus service.

Without doubt the most picturesque of the three Park City ski areas offering vast expansive terrain. 4000 Acres of Terrain — 19 Ski Lifts and 182 Runs — Canyons is also a great Choice for Snowboarding — with 6 Natural half pipes and two great terrain parks.

With Great on Mountain Dining including the epic mountain restaurant, Lookout Cabin; offering fabulous food and even better panoramic views of this stunning area.

Exclusively a skier only resort, with some of the highest quality piste grooming in North America, plus some fantastic glades and chutes in the Empire Bowl. Deer Valley ski resort effortlessly oozes both style and glamour and is THE place to be seen.

With 2026 skiable acres 21 ski Lifts and 100 ski runs Plus 32% Advanced 41 % Intermediate and 27% Beginners Terrain — Deer valley has something to suit all skiers. Having experienced the resort many times — I can vouch for the award winning Groomed runs and some fantastic Off Piste Skiing in the bowls.

Deer Valley also offers some of North Americas most luxurious Ski Lodges and Condominiums Including The Montage, St Regis and the Legendary Stein Eriksen Lodge.

Dating back to the great silver mining boom of 1872, Park City has lots of history, character and a great atmosphere.

It is an excellent base to explore all 3 ski areas — as Deer Valley is next door and The Canyons ski resort a short drive away. All are covered on the great value Three Resort International lift ticket and offer over 9,000 acres of unbelievable skiable terrain, from cruising groomers to steep and deep bowls. Just 45 minutes from Salt Lake City Airport you will discover ‘The Greatest Snow on Earth’ at one of North America's best-known resorts and Utah's largest ski area, both in terms of skiable acreage and lift capacity.

The resort opened in 1963 when it was known as Treasure Mountain. Since then, the legendary powder snow of Park City has long been an irresistible attraction for skiers and Park City Mountain Resort offers terrain to please every ability, level and taste.

A former mining town, this colourful past is at the heart of Park City and the spirit of the Old West is still be to be found in the historic Victorian buildings on Main Street. Skiing in North America doesn't get better than this!

The town has an ambience that is reminiscent of Park City, Utah's past life as an historic mining town and is filled with a variety of unique shops, restaurants, bars and art galleries. There is even a saloon owned by Robert Redford and, ironically, once robbed by the real Sundance Kid that Redford famously portrayed on film.

Night skiing is offered seven nights a week on one beginner and one intermediate slope. It attracts both skiers and snowboarders alike and is a major tourist attraction for skiers from all over the United States. Park City holds many training courses for the U.S. Ski Team, including slalom and giant slalom runs. The resort hosted all snowboard events and the men's and women's alpine giant slalom events in the 2002 Winter Olympics.

Beautifully restored Main Street, with its old wooden sidewalks and clapboard buildings, is in the centre of Park City. It is here that the most lively bars and restaurants can be found.

Born2ski recommends Park City Powder Cats and Heli-Ski, home to some of the most diverse and highest quality powder skiing and riding in North America.

A Visit to Utah is not complete without sampling some of the Best Cat Skiing and Heli Skiing in North America.

The private resort encompasses more than 40,000 acres of the Thousand Peaks Ranch, a privately owned sheep ranch in summer, turned into a powder hounds dream in winter. Park City Powder Cats have the exclusive rights to the use of this vast terrain, offering guided Snow cat skiing and snowboarding as well as privately booked Heli-Skiing.

Park City Powder Cat & Heli-Ski’s staff of professionally trained Guides and Cat drivers will take you on an un-paralleled backcountry experience of a lifetime.

This rollercoaster of a ride at Park City Mountain Resort zips and loops for over a mile and sends you down a metal track at 30 mph. The coaster delivers a thrill in the summer and winter for adventure-seekers of all ages. I have done it and would really recommend this for some great family or Group Fun.

The Utah Olympic Park was a competition venue for the 2002 Olympic Winter Games for Nordic jumping and the sliding sports of bobsleigh, luge and skeleton. The nearly 400-acre Park features a mixture of sporting facilities and visitor areas for an incredible Olympic experience.

The Utah Olympic Park, a U.S. Olympic Training site, now serves as a year-round competition and training ground for recreational and high-performance athletes. Visitors can watch athletes in training, visit the Alf Engen Ski History Museum and the 2002 Eccles Winter Olympic Museum, race down the track in a bobsled, or learn how to steer your own skeleton or luge by taking an Intro camp. Admission to Utah Olympic Park is free.

Travel to the top of the world's highest altitude ski jumps and see the fastest bobsled, luge and skeleton track where Olympic history was made. Watch athletes in winter training as they ski jump off of the K90 and K120 Nordic hills and launch themselves into the air off the freestyle aerial kickers.

Go up to 80 miles per hour, experience 5 G's of force and equivalent of a 40-story drop in less than a minute on a four person public passenger bobsled ride. An experienced driver takes three passengers on a thrilling ride down the entire length of the Olympic bobsled track. Participants must be 16 years of age and older.

Park City's many award-winning restaurants are among the finest in the West, reflecting several different culinary styles and influences. More than 100 options provide an answer to every taste, mood and budget-and everything's within walking distance or a short bus ride away. After dinner you may want to wind down with an evening of contemporary jazz or wind it up at hot, local dance clubs.

Having visited some of the many excellent restaurants Born2ski can recommend the Après ski and dining as some of the best in North America.

Snowboarders and skiers can rip in numerous terrain parks, half pipes and acres of free riding terrain at the Canyons Resort and Park City Mountain Resort. Deer Valley Resort offers skiers plenty of free riding terrain. Those new to the exploding popularity of terrain parks can even take lessons to become acquainted with the latest tricks and techniques. On any given day, some of the world's best snowboarders and skiers can be found riding in the parks and pipe of Park City.

Park City's 100-plus restaurants and bars reflect culinary styles and influences from around the world. Award-winning eateries answer to every taste, mood and budget-and everything is within walking distance or a short bus ride away.

Park City's après-ski scene is alive and well. Each of the towns more than 20 bars and clubs has its own style and ambiance. Whether you're interested in dancing to DJ-spun beats, catching some live jazz or enjoying wine tastings, Park City's establishments have it all.

Snowshoeing offers a good workout and is a great way to get close to nature. Find solitude and seclusion snowshoeing through the Rocky Mountains' pristine scenery. If you haven't been out in the snow in a while, you may have forgotten just how peaceful it can be.

Before there was the thrill of alpine skiing, there was the serenity of cross-country skiing. Park City offers several options for this vigorous and fulfilling sport. Glide along groomed trails or take a custom tour in the nearby Wasatch-Cache National Forest.

People of all ages and abilities will enjoy lift-served tubing at Gorgoza Park-an ideal activity for the young and the young-at-heart.

After a hard day on the slopes, make time for some pampering. Park City features many luxury spas that offer a vast array of invigorating massages and treatments.

Each of Park City's resorts regularly hosts ski and snowboard races. Courses are open daily for racing against the clock or a friend. Races are also ideal for group outings, corporate retreats and family gatherings.

Experience Park City's winter wonderland the old-fashioned way in a horse-drawn sleigh ride through the mountains surrounding town. It's a great family-friendly activity, and dinner rides or romantic outings can also be arranged.

The Park City Ice Arena at the Quinn's Junction Recreation Complex offers ice skating on an Olympic-sized ice sheet. The 46,000 square foot building also features party rooms, skate rentals, locker rooms and concessions. Bring the kids or spend a romantic evening on the ice. Ice hockey, speed skating and figure skating classes are offered. There is also an outdoor rink at the base of Park City Mountain Resort.

To enquiry about your next ski holiday, please complete the booking enquiry form below or call Mike on 0113 238 5624 (email mike@born2ski.com)