Since a horizontal chair lift linked the skiing of Villars to its near neighbour Les Diablerets in 1997, it has been possible to ski 125km (75miles) of trails without needing to take your skis off. The ski areas are concentrated on several separate mountain areas, above Gryon and Barboleuse, Villars itself and on Iseneau above les Diablerets. The longest journey possible, when the glacier lifts are open, is to take the chair rides over to les Diablerets, cross the village, then take the lift up to Iseneau and the trail down to the road at Col du Pillon from where a series of cable-cars take you up to the Diablerets glacier and the long run of 14km (9 miles) down to the road and a bus ride back to les Diablerets to get the lift back over. A day should be allowed for this epic, lift-served touring but it can be done almost entirely on easy or intermediate level trails, with one short (100 yards?) unavoidable black stretch as you come down the glacier. More blacks can be added in to the route if you'd prefer more! There is a mix of terrain both above and below the treeline, most of it being of intermediate standard (European red runs). The fastest way to reach the skiing is to take the gondola from the edge of the village up to the Roc, a key launch pad for lifts across the area. Experts have several black runs to enjoy including a long descent from the Roc d'Orsay to Villars and shorter runs from Chaux Ronde and Petit Chamossaire down to Bretaye. A further black run offers a route down from Croix des Chaux above Barboleuse and Gryon, down the edge of one of the Snowboard Parks in to the valley at La Rasse from where the chair returns over to Villars. There's also off piste opportunities all over the area with the ski school guides and other expert routes over at the glacier. Intermediates have pretty well all the rest of the terrain suited to them and, as with experts, can double the available trails and lifts by purchasing the Alpes Vaudoises Pass, which covers 200km (125miles) of terrain at key resorts in the area, as well as the transportation between them in many cases. The pass covers the Diablerets glacier, Gryon Les Diablerets, Les Mosses and Leysin as well as Villars. Passes of 4 Days or more additionally entitle holders to unconditional use of the lifts of Chateau d'Oex ( La Lacherette ), Gstaad, Gsteig, Lauenen, Rougemont, Saanen, Saanenmoser, St Stephan, Schnried and Zweisimmen. Purchasers of passes of 6 days or more also entitle holders to a day on the lifts of Les Portes du Soleil, Les Marecottes, Ovronnaz, Crans Montana, Aminona, Vercorin, Grimentz, St Luc, Chandolin, Loche-les-Bains or Anzere). A second route in to the skiing is to take the old mountain railway from the village centre up to Bretaye at 1800m (5900 feet) from where a network of chairs and surface lifts branch out in all directions. It's a 20 minute rail trip through wonderful scenery and is well worth doing even without the skiing waiting above. 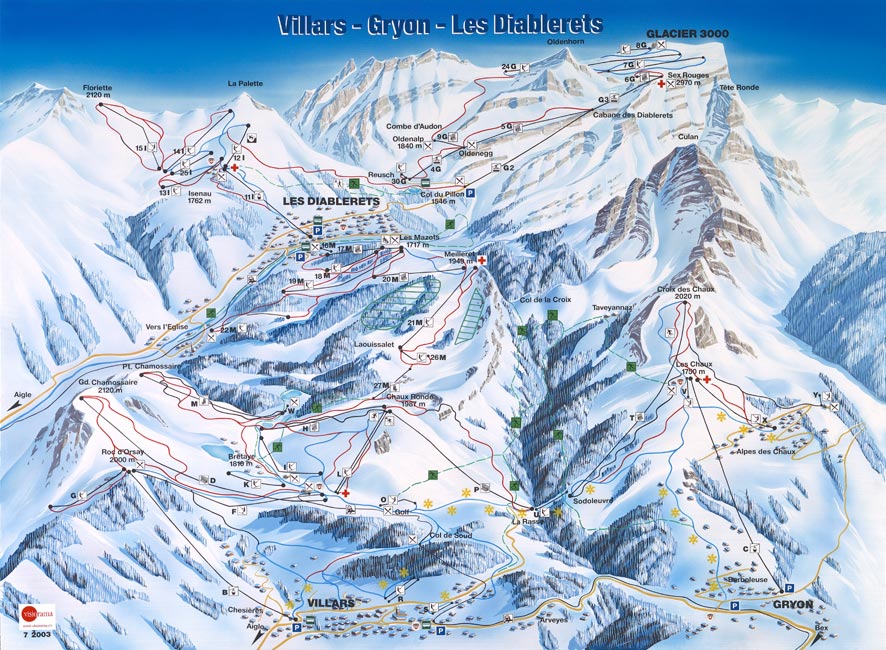