Bormio's 1792m (5879 feet) vertical is one of the three greatest in Italy, beaten only by Alagna and Cortina. This is not a vast inter-linked skiing domain however, more a place for those who love to get to the top of the mountain and then have huge long hassle-free descents of up to 14km (9miles) back down to the resort. The lower two thirds of the slopes are forested and protected by snow making. There is a choice of two routes up, each from the edge of town (there is a ski bus but many will find their accommodation a short walk away). The cable car ascends first to Bormio 2000 - the main nursery area with guaranteed snow. It then carries on to the summit of Cima Bianca from where there's a choice of descents, including the long blue all the way to the bottom, which beginners might attempt by the end of their first week. The second route up is to take the shorter gondola to Ciuk, then a chair to the Bormio 2000 area. Intermediates will enjoy Bormio the most with its long sweeping runs and fast easy routes. Experts have a more limited choice but the Pista Stelvio was the course for the Men's Downhill in the 1995 World Championship. Bormio is part of the Alta Valtellina Lift Pass system which gives skiing access to the slopes of Livigno, Santa Caterina and San Colombano and with a six day pass you also get one free day over the border, which includes famous St Moritz. The resort where you're most likely to make use of the pass is Bormio's near neighbour Santa Caterina, a traditional but high and snowsure village with another 40km (25 miles) of trails. It is the home of former Olympic champion Deborah Compagnoni. On the other side of Bormio the San Colombano lifts serve another mixture of mostly easy and intermediate trails, with one black at Oga.

Known for its thermal spas, Bormio has three different spa complexes in and around the resort. Each of them are sourced by natural mineral-rich springs and offer both indoor and outdoor bathing pools, saunas, steam rooms as well as beauty and wellness treatments.
Bormio retains its rich history and authenticity with its historical buildings, churches and chapels which makes for a scenic stroll, especially down its cobbled streets of Via Roma with clusters of bars, restaurants and shops.
Apres ski is lively at its slope side bars that go up to Bormio 2000. Apart from the local bar scene, there isn’t much nightlife in the resort with only a few small nightclubs around.
Leisure activities in resort include ice skating at its Olympic standard ice rink and a fitness centre as well as snowshoeing, ice climbing, parapenting and husky sleigh rides. 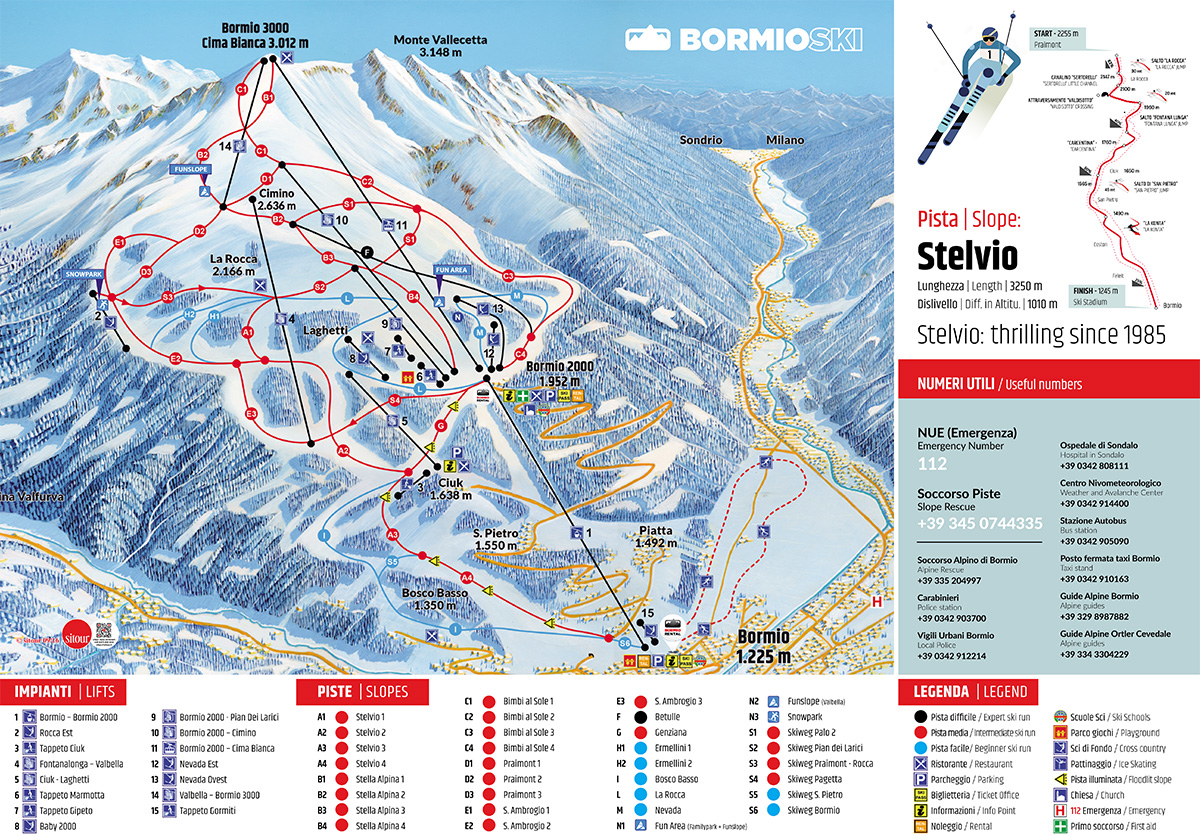