The Gastein ski area, one of Austria's largest, is separated in to four areas, served by four resorts and several small additional lift base areas. The ski area is centred on Bad Gastein, the biggest settlement in the valley. The largest of the ski areas begins on the Stubnerkogel mountain above Bad Gastein and is more-or-less lift-linked, via the small Angertal Ski centre, to the skiing on the Schlossalm above Bad Hofgastein. A second lower area, reached by train or bus down the valley, links Grossarl (in the next valley) to Dorfgastein at the bottom of the Gastein Valley, over the Kreuzkogel Mountain (2027m). The third and highest ski area is the small sector above Sport Gastein which has a base at 1600 metres and a snow-sure top lift at 2685m on the Kreuzkogel mountain. The off-piste powder trails down from here are particularly highly regarded. Bad Gastein has a second ski area of its own, on the Graukogel from which the Kamikaze descent is a popular run for good local skiers. The Gastein Super Skischein (Super Ski Pass) covers all of the resorts in the Gastein Valley and the trains and bus services linking the various ski areas between 8am and 6pm so long as you use these when skiing or snowboarding. Bad Gastein is one of the first resorts to offer the Power Pass, an electronic ski credit, which is charged with a certain value, which is debited automatically each time a lift is used. The Power Pass can be used in different ski areas including all of the Gastein Valley and on far flung attractions such as the famous big wheel in Vienna.

Bad Gastein is known for its few popular bars in resort for a lively apres ski atmosphere, nightlife is generally relaxed and low-key. The resort vibe is aimed more on convivial dining experiences followed by relaxed drinks in hotel bars. The liveliest bar is the Silver Bullet Bar and the resort also has a grand casino and a few small nightclubs.

Non skiing activities in the resort include toboggan runs which are floodlit in the evenings, horse riding excursions, snowshoeing, ice skating, ice climbing, curling, as well as relaxing at either of the two thermal spa centres - the Felsentherme Spa in resort and the Alpentherme Spa + ‘Relax World’ in neighbouring Bad Hofgastein. 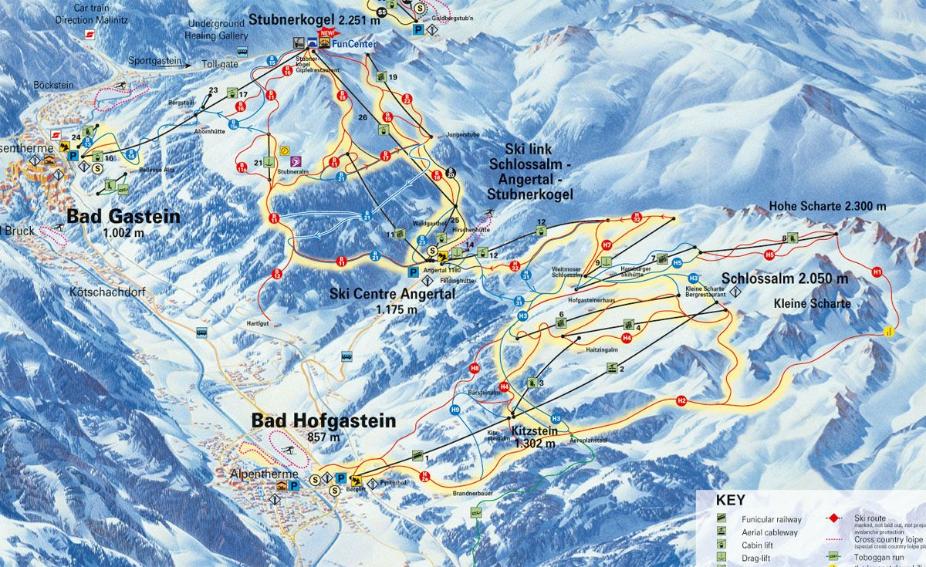